The Book of Gold: A 17th Century Magical Grimoire of Amulets, Charms, Prayers, Sigils and Spells Using the Biblical Psalms of King David - by David Rankine

Le Livre d'Or (The Book of Gold) is a unique 17th century French magical work comprising numerous amulets, charms, prayers, spells and sigils for working with the Biblical Book of the Psalms of King David. Written in a simple style akin to a… 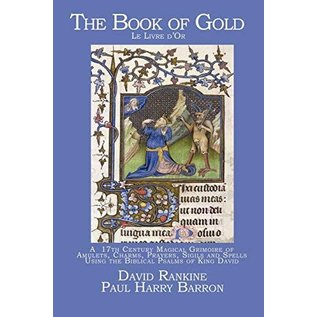 Le Livre d'Or (The Book of Gold) is a unique 17th century French magical work comprising numerous amulets, charms, prayers, spells and sigils for working with the Biblical Book of the Psalms of King David. Written in a simple style akin to a medieval Book of Secrets combined with magical practices from the ancient world, Le Livre d'Or brings together practices which have their roots in major works from the Dead Sea Scrolls and the Cairo Genizah, to the Greek Magical Papyri and Sepher Shimmush Tehillim (Magical Use of the Psalms). Now translated into English for the first time, this exceptional text demonstrates the significance of the Psalms as a unifying and vital thread throughout the development of Western magic. From Sweden to Syria, Britain to the Baltic, the use of appropriate Psalms has spread as a significant part of popular folk and religious magic, and Le Livre d'Or is an inimitable example of the transmission of divine power through the written and spoken word. Le Livre d'Or was originally bound as part of Lansdowne MS 1202 with a 17th century French copy of the most important of grimoires, the Key of Solomon. The extensive commentary by David Rankine and Paul Harry Barron emphasises the place of the Psalms within the Grimoire tradition, detailing their extensive apotropaic, amuletic and coercive uses in works such as the Book of Abramelin, the Key of Solomon and the Goetia. The editors also illustrate how the magic of the Psalms has underlain and cross-fertilised numerous traditions over the last two thousand years, from Hellenic magicians, early Christians and Jews of the ancient world to practitioners of the medieval Grimoires and Renaissance Cunning-folk. Whether it was for benevolent or malefic results, Le Livre d'Or provided the appropriate Psalm verses and relevant techniques. This previously ignored work is an outstanding example of eminently practical magic which not only draws on such major works as the Heptameron and the Steganographia, but also many of the divine names found in the Kabbalah. From Saints to spirits, characters to Creeds, Le Livre d'Or shines forth as a significant and reclaimed chapter in the Western Esoteric Traditions.