Sir Gawain: Knight of the Goddess - by John Matthews

Home / Sir Gawain: Knight of the Goddess - by John Matthews

Restores Gawain of Camelot to his true role as the foremost representative and servant of the Goddess.… 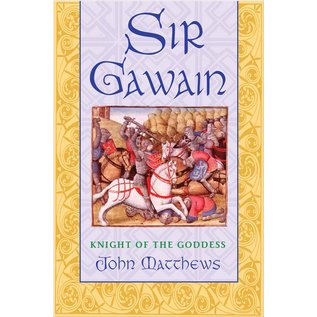 Restores Gawain of Camelot to his true role as the foremost representative and servant of the Goddess.

• The full story of Gawain of Camelot that restores a lost piece of the great Arthurian tapestry.

• Traces the historical trends that demoted Gawain from the foremost knight of the Round Table to a villain and womanizer.

• The result of more than 20 years of research by one of the world's leading scholars of Arthurian mythology.

Sir Gawain, the nephew of King Arthur, was once the most important knight at Arthur's court, a shining example of all that was best in chivalry. He even outranked the famous Lancelot. Yet as the popularity of the Arthurian romances grew, the character of Gawain became increasingly diminished in popular literature. John Matthews explores the phenomenon that influenced the recasting of Gawain from hero to womanizing villain, providing a scholarly context through which Gawain's role as the representative of the Goddess upon Earth--the real Green Knight of Camelot and Sovereignty's Champion--may be restored. In addition, the author presents a unique view of the mythology of Britain and its connections with the historical changes that took place over many hundreds of years in the religious and mystical traditions of the country.