Mesopotamian Mythology: A Captivating Guide to Ancient Near Eastern Myths - by Matt Clayton

If you're looking for a captivating collection of Mesopotamian myths, then keep reading...The civilizations that grew up in the Tigris and Euphrates River Valleys many thousands of years ago have left important legacies: agriculture,… 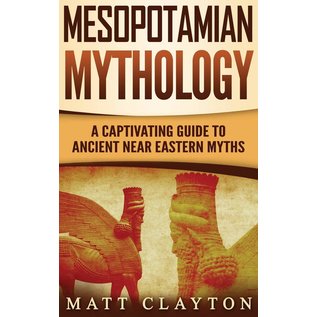 If you're looking for a captivating collection of Mesopotamian myths, then keep reading...The civilizations that grew up in the Tigris and Euphrates River Valleys many thousands of years ago have left important legacies: agriculture, mathematics, astronomy, the wheel, and writing.This present volume of Mesopotamian myths is divided into three sections. The first of these contains creation myths, the most extended of which is the Enuma Elish, or Babylonian creation story. In this myth, the god Marduk does battle with the dragon Tiamat, and from her body and that of her second-in-command, he creates the world. The story of Atrahasis involves not original creation but re-creation, since this is the myth of the Great Flood that the gods send to wash everything away. The good man Atrahasis is spared only by the intervention of the god Enki, who forewarns Atrahasis and tells him to build the ark that will save him, his family, and the animals. Etana's tale is less cosmic in nature than the preceding two stories: the act of creation involved is Etana's attempt to have a child and thus an heir to his throne.The deeds and foibles of the Mesopotamian gods are on display in the second section, in stories that inform us about the characters of these divinities and which contain themes that tell us something about Mesopotamian concepts of cosmic order. In the first story, the goddess Ishtar decides to visit the Underworld where the goddess Ereshkigal holds sway. When Ereshkigal worries that Ishtar plans to supplant her, she sets a trap that holds Ishtar prisoner until she is rescued. Ereshkigal's deed has cosmic implications: since Ishtar is a fertility goddess, her imprisonment means that procreation on Earth is suspended.Ereshkigal is a primary figure in the next story as well, which tells how Nergal, god of war and pestilence, comes to be her consort. Nergal manages to refuse all of the blandishments Ereshkigal puts before him, except for the enticement of her body. Having given into his desire, Nergal must make the Underworld his abode and remain there as Ereshkigal's lover or else Ereshkigal will overturn the natural order by sending the dead onto the Earth to eat the living. Divine and natural order are also themes of the last two stories in this section. In the first, the hero-god Ninurta does his own work of restoring divine order when he defeats the Anzu Bird who steals the Tablets of Destiny from Ellil, while the myth about Adapa functions as a just-so story explaining why humans are not immortal.Perhaps the most famous of all Mesopotamian myths is the Epic of Gilgamesh, an extended narrative about the exploits of Gilgamesh, king of Uruk, and his wild-man friend, Enkidu. If the stories of the gods told in the first two sections function as explanations about cosmic order, the themes of Gilgamesh center on the internal order of human beings, focusing on the deep love and friendship between Enkidu and Gilgamesh, on human fears about mortality, and the human desire for eternal life.In Mesopotamian Mythology: A Captivating Guide to Ancient Near Eastern Myths, you'll find the following Sumerian myths and topics covered Creation Myths Tales of Gods and Goddesses Selections from the Epic of Gilgamesh And much, much more So if you want a captivating collection of Mesopotamian myths, click the "add to cart" button