King Solomon the Magus: Master of the Djinns and Occult Traditions of East and West - by Claude Lecouteux

Home / King Solomon the Magus: Master of the Djinns and Occult Traditions of East and West - by Claude Lecouteux 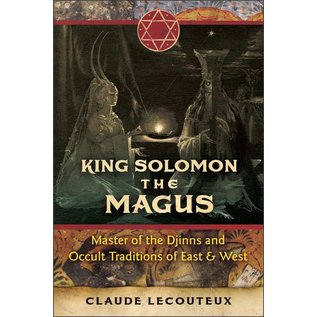 • Examines Solomon’s magical possessions, including his famous ring that gave him command over animals, weather, demons, genies, and djinns, as well as his amulets, remedies, exorcisms, and charms

• Looks at the extensive presence of Solomon in folklore around the world, including in Armenia, Malaysia, Russia, Bulgaria, Morocco, India, and Egypt

Looking at the Solomonic magical tradition and Solomon’s profound influence on esoteric traditions around the world, Claude Lecouteux reveals King Solomon not only as one of the great kings of prehistory but also as the ancient world’s foremost magician and magus. Examining the primary sources on Solomon, such as the Bible, the Koran, and the writings of Flavius Josephus, the author explores Solomon’s judgments, his explorations, his literary and scientific works (including an herbal), and his constructions beyond the eponymous temple, such as the copper city in Andalus built by the djinns and the baths of Sulayman. He also looks at Solomon’s magical possessions, such as his famous ring and the Philosopher’s Stone. The author examines the supernatural powers granted to Solomon by the ring he received from Gabriel, including command over animals, weather, and demons, and explores in detail Solomon’s power over genies and djinns. Following the esoteric threads hidden within the primary sources on Solomon, Lecouteux reveals the work of Solomon the Magician, exploring his amulets, remedies, exorcisms, charms, and his influence on Arab and Western magic. Providing illustrations of sigils, talismans, and other magic symbols related to Solomon, the author examines the schools of Solomonic magic and works such as The Greater and Lesser Keys of Solomon the King and The Hygromancy of Solomon. He then looks at the extensive presence of Solomon in folklore worldwide, including in Armenia, Israel, Malaysia, Eastern Europe, Russia, Morocco, India, Mongolia, and among the Abyssinians of Ethiopia and the Copts in Egypt. He also looks at Solomon’s role within the Bulgarian tradition from which the Cathars derived. Painting an in-depth portrait of Solomon the Magician-King, Lecouteux reveals how this legendary magus left a deep impression upon the occult, magical traditions, and philosophies of the ancient world that can still be felt to this day.