This keepsake altar box is made of aluminum and features the famed Phaistos Disk of Crete. 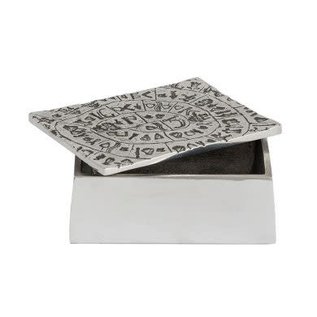 This altar piece was imported from Greece and created by Greek artists in honor of the Old Gods.

This keepsake altar box is made of aluminum and features the famed Phaistos Disk of Crete.

The Phaistos Disc was originally a disk of fired clay from the Minoan palace of Phaistos on the Greek island of Crete, possibly dating to the middle or late Minoan Bronze Age (2nd millennium BC). It is about 15 cm (5.9 in) in diameter and covered on both sides with a spiral of stamped symbols. Its purpose and meaning, and even its original geographical place of manufacture, remain disputed, making it one of the most famous mysteries of archaeology. This unique object is now on display at the archaeological museum of Heraklion. The Minoan Civilization thrived in the Bronze age (in roughly 3,000 BC) within the Aegean. The center of this civilization was Crete while the Palace of Knossos is today a visitable excavation area with remarkable original restored exhibits from the ancient Palace.