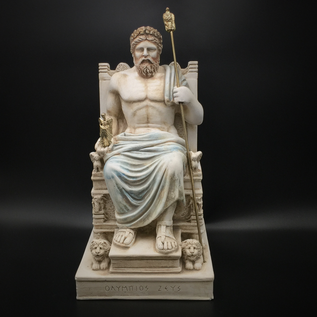 $180.00 Excl. tax
Brand:
OMEN
Zeus (Ancient Greek: Ζεύς, Zeús; Modern Greek: Δίας, Días; English pronunciation /zjuːs/ is the "Father of Gods and men" rules the Olympians of Mount Olympus as a father rules the family according to the ancient Greek religion. He is the god of sky and thunder in Greek mythology. Zeus is etymologically cognate with and, under Hellenic influence, became particularly closely identified with Roman Jupiter.

This sculpture is made of casting stone!