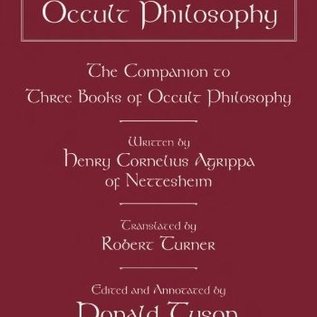 $39.99 Excl. tax
Brand:
OMEN
The Fourth Book of Occult Philosophy, by Henry Cornelius Agrippa and unnamed others, is considered one of the cornerstones of Western magic, and the grimoires it contains are among the most important that exist in the Western tradition. For more than three hundred years, this mysterious tome has been regarded as difficult or even impossible to understand―until now.

Occult scholar Donald Tyson presents a fully annotated, corrected, and modernized edition of Stephen Skinner’s 1978 facsimile edition of the original work, which was six tracts published as one volume in 1655. For the first time, these classic works of Western magic have been rendered fully accessible to the novice practitioner, as well as occult scholars and skilled magicians. Tyson presents clear instruction and practical insight on a variety of magic techniques, providing contemporary magicians with a working grimoire of the arcane.