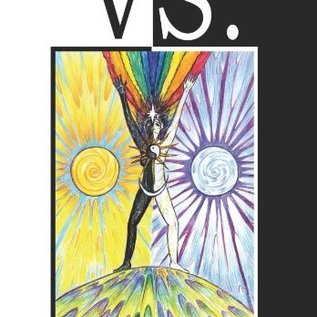 $24.99 Excl. tax
Brand:
OMEN
Vs. Duality and conflict in magick, mythology and paganism Edited by Kim Huggens "Relationship cannot be created without duality: we are divided for love's sake, for the chance of union..."

Vs. is a unique collection of twenty-one essays exploring the dynamic and wide-ranging nature of duality in magic, paganism and folklore, from polarity to paradox to opposition to friction to union. The essays by magicians, witches, folklorists, sorcerors, Norse and vodou practitioners, weave together diverse threads of wisdom, knowledge, experience and inspiration into a tapestry of fallen angels, heroes, gods, goddesses, fairies, lwa, dreams, myths and stories. The significance of the interplay between two disparate or similar powers is explored through the relationship of divine twins, siblings, lovers and enemies in a variety of different pantheons and tales, from Cain and Abel to Lilith and Eve, from Shiva & Shakti to Inanna and Dumuzi, from Perseus and Andromeda to Ares and Hephastus. The union of divine and mortal is another powerful theme explored in this book, both through the hieros gamos (sacred marriage) and the maryaj (Vodou spirit marriage) where a person weds one of the lwa. Vs. also explores the theme of self and other, as experienced both in ritual techniques for trance and dreaming, and in social commentaries on the diversity of beliefs within the modern esoteric revival such as Wicca, Sorcery and Neopaganism. Vs. covers a span of thousands of years, from ancient writings such as those of Plato and Gnosticism to the modern works of twentieth century magicians such as Austin Osman Spare and Dion Fortune. From the wisdom of the Emerald Tablet to the tales of the Mabinogion, Vs. challenges you in numerous ways to accept diversity and strive for the union of perfection. "I am the voice whose sound is manifold and the word whose appearance is multiple. " Thunder, Perfect Mind, 3rd century CE