Thracian Magic: Past & Present - by Georgi Mishev and Valeria Fol and Ekaterina Ilieva

Thracian Magic: past & present is a phenomenal volume of work by the Bulgarian author Georgi Mishev, which opens up the treasure trove of folklore and magical practices of the Balkan Peninsula into the English language for the first time. The… 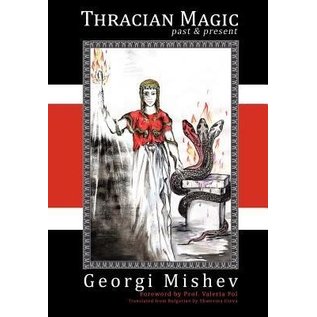 Thracian Magic: past & present is a phenomenal volume of work by the Bulgarian author Georgi Mishev, which opens up the treasure trove of folklore and magical practices of the Balkan Peninsula into the English language for the first time. The author examines the magical practices of modern day Bulgaria and the surrounding Balkan countries, tracing them to their roots in the ritual traditions of Thrace and the Mystery Cults of the ancient world. The ritual practices of the Thracians survived through Christian and other overlays for many centuries in Balkan communities through into modern Bulgaria, carried by successive generations of practitioners. Evidence for the antiquity of these modern survivals can be found in numerous ancient literary sources, including the Hittite ritual texts, the Greek Magical Papyri, the Orphic Argonautica, the Derweni Papyrus, as well as in the writings of Homer, Plato, Strabo and others. Further clues are found in curse tablets and other archaeological finds. The transmission of the ancient mysteries through Orpheus, Musaeus, Eumolpus, Zalmoxis, Rhesus, the Thracian Prophetess of Dionysos and the nymph Thrake are all considered in turn, to help demonstrate the distinctive flavour found in the practices of the region. Likewise the ways in which secret knowledge was preserved, as well as the roles of both the Healer and the Magician in Bulgarian traditional culture shed additional light on the diversity and depth to be found in the research presented in this volume. The importance and survival of the Great Goddess in the practices and beliefs of the region is explored in the final chapter of the book, 'Concepts Of The Goddess'. Here the reader is introduced to the roles of goddesses such as Hekate, Artemis and Bendis, as well as to the Mother of the Sun, the Mountain Mother, the Virgin Mistress of Fire and the She-Wolf. Additionally, both the continued existence and re-emergence of the Great Goddess in the form of Christian saints such as the Mother of God, Fiery Marina, Petka and Nedelya are examined in turn, alongside the Samodivi forest spirits who combine the characteristics of both nymphs and ancient goddesses. From divination to healing, initiation to fertility spells, curses to protection from the evil eye and other malefic influences, this book embraces and reveals the scope of a living tradition with its roots deep in the ancient world. Thracian Magic: past & present opens up the field of study in a unique way, being both practical and accessible, whilst simultaneously maintaining its scholarly integrity. ~ "One writes about magical practice most commonly either from the position of a scholar or from the position of a practitioner. The book, which G. Mishev offers us, leads the reader into the secrets of the magical with the dignity of a descendant and carrier of millennial traditions, preserved in the South-eastern European area, and with the passion of an explorer, rushing towards the light of knowledge." Prof. Dr. Sc. Valeria Fol ~