The Temple of Solomon: From Ancient Israel to Secret Societies - by James Wasserman

Home / The Temple of Solomon: From Ancient Israel to Secret Societies - by James Wasserman

A fully illustrated history of the Temple of Solomon… 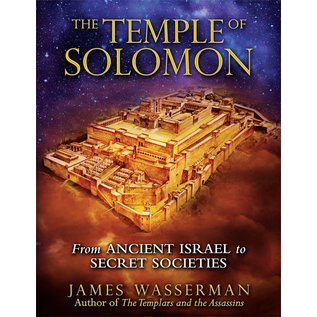 A fully illustrated history of the Temple of Solomon

• Examines the Temple of Solomon in the Hebrew Scriptures, the New Testament, and Apocryphal writings

• Explores its role in the founding of Freemasonry, the legends of the Knights Templar, the doctrines of the Kabbalah, and the teachings of Islam

• Richly illustrated, including many photos and images from rare archives

The spiritual heart of many esoteric societies, the Temple of Solomon was located atop the Temple Mount in Jerusalem, a site venerated by the three great monotheistic religions as the intersection of Divine and human. Built by King Solomon at the peak of ancient Israel’s power, the Temple of Solomon housed the golden Ark of the Covenant in its Holy of Holies, a sacred chamber where one could communicate directly with God. Centuries after the temple’s destruction, the Temple Mount was used as the headquarters for the Knights Templar during the Crusades, and countless legends have come down through the centuries about the secrets they may have uncovered there, including discovery of the Holy Grail or the Ark of the Covenant. Richly illustrated with biblical and Masonic illustrations, photographs, and ancient and modern paintings—many from rare archives—this book explores the Temple of Solomon in the Hebrew Scriptures, the New Testament, and Apocryphal writings as well as its role in the founding of Freemasonry, the legends of the Knights Templar, the doctrines of the Kabbalah, and Muhammad’s visionary journey from the Temple Mount through the heavens. Seeking to understand the powerful desire of many religions and secret societies to re-create the temple through ritual and prayer, James Wasserman explains why it was built, the magical forces King Solomon may have used in its creation, what its destruction meant for Jews and Christians alike, and why the Knights Templar as well as several modern secret societies named their orders after it. Detailing the sacred architecture of this perfectly proportioned mystical edifice through words and art, the author reveals the Temple of Solomon as the affirmation of God’s presence in human affairs, the spiritual root of Western culture, and an important monument to the Divine nearly forgotten in today’s secular times but sorely needed to bridge the divide between our ancient past and our spiritual future.