The Secret Doctrine of the Kabbalah: Recovering the Key to Hebraic Sacred Science (Original) - by Leonora Leet

Home / The Secret Doctrine of the Kabbalah: Recovering the Key to Hebraic Sacred Science (Original) - by Leonora Leet

A vast reconstruction of the knowledge of the ancient Jewish priest-scientists, with vital implications for contemporary spirituality and… 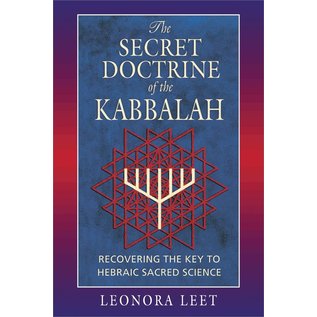 A vast reconstruction of the knowledge of the ancient Jewish priest-scientists, with vital implications for contemporary spirituality and science.

• Reveals an ancient science that used geometry, sound, and number to link the finite world of human experience with the infinite realm of the divine.

For centuries the Kabbalah has fascinated devotees of mysticism while its origins have remained obscure. Now, in her brilliant new work, Leonora Leet reveals that the Kabbalah was the product of a sophisticated, though largely forgotten, Hebraic sacred science that was the rival of any in Egypt or Greece. Not only does Leet reconstruct the secret teachings of the priest-scientists of the Hebrew temple, she also shows them to be the key to understanding both biblical and kabbalistic cosmology.

Unlike previous purely historical explorations of the Jewish esoteric tradition, The Secret Doctrine of the Kabbalah resurrects this ancient body of knowledge to reveal eternal truths that can have a profound and positive impact on contemporary spirituality. New experimental methods of practicing Hebraic sacred science are explored that explain as never before the meaning of the central cosmological diagram of the entire Western esoteric tradition--the kabbalistic Tree of Life. Leet shows that the Kabbalah and its central diagram enshrine a key to the purpose of the cosmos, a key that has vast implications for modern physics and cosmology.

In a final synthesis, she envisions a culmination in which the universe and its divine child, perfected humanity, achieve that unification of the finite and infinite which has ever been the secret doctrine of the Kabbalah.