The Lost Art of Enochian Magic: Angels, Invocations, and the Secrets Revealed to Dr. John Dee [With CD (Audio)] - by John Desalvo

Home / The Lost Art of Enochian Magic: Angels, Invocations, and the Secrets Revealed to Dr. John Dee [With CD (Audio)] - by John Desalvo 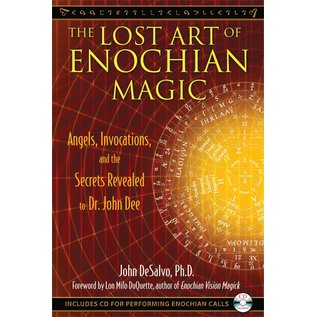 Enochian magic is a powerful, ancient system for opening portals to heavenly realms and enabling the ascent to God. The basis for many of the modern systems of magic, including the Golden Dawn, Enochian magic is named after the biblical prophet Enoch, who received the same knowledge and wisdom that was later conveyed to the astrologer to the court of Queen Elizabeth I, Dr. John Dee, by angels in the 16th century. In The Lost Art of Enochian Magic John DeSalvo traces the history of magic—from the earliest civilizations of the Akadians and Egyptians through the Greco-Roman period and up to the present time—to reveal how magic has penetrated and influenced our religious beliefs and practices today. Through his unprecedented investigation into the angelic magic of Dr. John Dee, during which time he deciphered Dee’s original phonetic notations in the margins of Dee’s 16th-century diaries, DeSalvo learned to properly reproduce the “Enochian calls,” which act like mantras in opening higher realms and invoking angels, key to this type of magical practice. DeSalvo shows how to use Enochian magic for personal spiritual development and also as protection from negative energies. In addition to providing detailed instructions for performing the magical meditations, this book includes a CD of Enochian calls to demonstrate and guide the correct pronunciation needed to practice Enochian magic.