The Square and the Circle: The Influences of Freemasonry on Wicca and Paganism - by Payam Nabarz

Home / The Square and the Circle: The Influences of Freemasonry on Wicca and Paganism - by Payam Nabarz

And in this way truly are erected the Holy Twin Pillars Boaz and Joachim [kisses breasts]. In beauty and strength were they erected, to the wonder and glory of all men Wiccan Book of Shadows On the face of it nothing could be further apart… 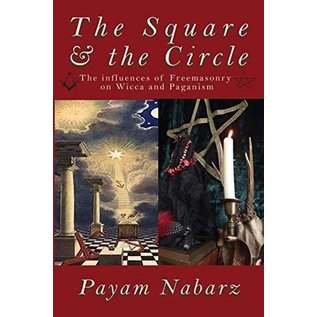 And in this way truly are erected the Holy Twin Pillars Boaz and Joachim [kisses breasts]. In beauty and strength were they erected, to the wonder and glory of all men Wiccan Book of Shadows On the face of it nothing could be further apart than Wicca, a Goddess/God-centric modern Pagan mystery school whose Rede is "An it harm none do what ye Will," and Freemasonry, a brotherhood/sisterhood and system of morality veiled in allegory, taught in a symbolic language, whose great principles are brotherly love, relief, and truth. But the connections between them are closer than might at first appear. This book reviews the literature of the history of Wicca with especial reference to its links with Freemasonry, demonstrating their surprisingly close historical affiliations. In addition the links between Freemasonry, Druidry, Sufism, and other modern Pagan movements are also examined. " For these truly are the five points of fellowship feet to feet, knee to knee, groin to groin, breast to breast, arms around back, lips to lips" Wiccan Book of Shadows "I will defend the Five Points of Fellowship, in enactment as well as concept..." Freemasonry's third-degree initiation In the heart of both Freemasonry and Wicca, there is the spiritual quest and journey, as in many other mystery schools. Freemasons begin as a rough ashlar stone and eventually transform to a perfect cube. Its study of the seven liberal arts and sciences educates their initiates, transforming their mind to become a living Temple to the Great Architect while the seven graces provide them with the moral compass to walk through daily life. Wicca's teaching is clearly stated in its Charge of the Goddess: "To thou who thinkest to seek Me, know that thy seeking and yearning shall avail thee not unless thou knowest the Mystery. If that which thou seekest thou findest not within thee, thou wilt never find it without. For behold, I have been with thee from the beginning; and I am that which is attained at the end of desire." The same message is also given to all Master Masons in their 3rd-degree ceremony: an injunction to reflect on "that most interesting of all human studies, the knowledge of yourself." In both, we can still hear down the centuries the echoes of Plato's teachings and the Delphic maxim at the Temple of Apollo at Delphi:: Know thyself. 'Merry Meet, Merry Part, Merry Meet Again' - the Wiccan farewell "Happy have we met, happy have we been, happy may we part, and happy meet again" - words spoken at the end of the second-degree Masonic initiation "We live in fascinating times. Right now a new zeitgeist is forming as we witness the first tentative steps of a new religion finding its feet in the public imagination. Wicca is well and truly here and gaining momentum as it spreads from England across Europe and the US, carried on the crest of a growing Neopagan revival. It remains largely ungoverned and with only a framework spiritual canon which gives flexibility to its practitioners and has no doubt added to its great appeal to individuals and groups as the more established and orthodox institutions become seen as increasingly irrelevant or out of touch. But is it new? In this work, Payam illustrates some of the surprising parents of this spiritual movement. It is said that all religions borrow from what came before despite this being often fiercely contested by its adherents. The family tree of Wicca has some odd bedfellows, of which the most prominent and perhaps surprising is Freemasonry; which, with its strict governing body and fixed catechisms, seems almost a polar opposite of what is seen in Wicca. The history and details of this relationship and the processes and people which intertwined them are here laid bare for the reader to see with a detailed and useful bibliography available for further study." - Ric Lovett, Pagan, Wiccan and Past Master."