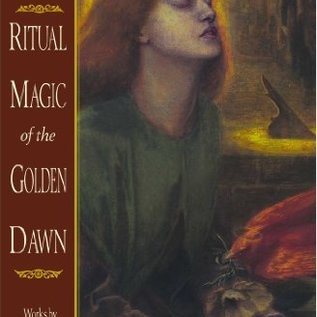 $16.95 Excl. tax
Brand:
OMEN
The secret writings of this mystical order reveal the keys to astral projection, clairvoyance, and other magical practices.

The present-day revival of the practice of magic owes much to the Hermetic Order of the Golden Dawn, the fin de siecle secret society that rediscovered many occult traditions dating back to antiquity. Prominent adepts of the Golden Dawn, whose members included W. B. Yeats and Aleister Crowley, preserved these traditions in manuscripts to be circulated among initiates of the Order. These documents, known as the Flying Rolls, reveal secrets of astral projection, clairvoyance, exorcism, alchemy, and other magical practices and occult philosophy. Many of the Flying Rolls escaped print and remained secret for some time, only slowly being tracked down over the years. Here, Francis King presents all the previously unpublished Flying Rolls.

• Renowned occultist Francis King includes previously unpublished secret writings of the Golden Dawn in this important collection., • These are essential texts for practitioners of magical techniques, and of great interest to any student of Western occultism.