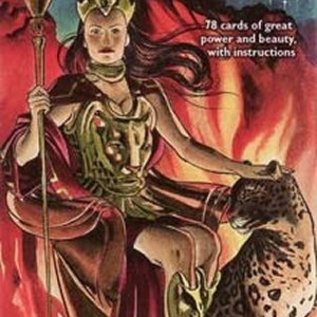 The cards in this deck and the companion booklet are printed in five languages: English, Spanish, French, Italian, and German.

Currently there are a few Golden Dawn Tarot decks available. They are all attempts of the artists to recreate the original design. Bertia asked Evangelisti to do something completely different. Instead of trying to improve on the known drawings, he simply gave Evangelisti descriptions of the cards from the original Golden Dawn documents.

The result is a breathtakingly new, yet faithful to the original concept. Instead of all the images being seen from the front, the views are more like films. You get images from below (such as The Wheel of Fortune) or from above (such as The Devil). The colors are bright and brilliant, filled with dash and intensity. The high priestess is a powerful woman in the midst of controlling powerful energies as she casts a spell. The horses of The Chariot are in full gallop, almost falling over themselves pulling the chariot. The charioteer can barely control them. The lion in the Strength card looks like he could tear your arm off and eat you for lunch without even panting.

This deck does not limit its inspiration to the Golden Dawn. It also uses the images from the RWS as the source for the Minor Arcana (the original Golden Dawn didn't have images on the Minors). As a result, for the first time ever, anyone who knows the RWS model can immediately work with this Tarot.

For a true Golden Dawn deck with a 21st century feel, this is the deck you must have.