• The first book to provide complete, specific instructions for casting the obi oracle of the Santería faith.… 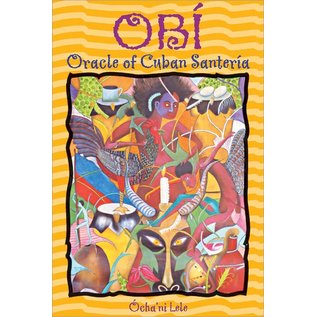 • The first book to provide complete, specific instructions for casting the obi oracle of the Santería faith.

• Uses the shell of a coconut, which embodies the spirit of Obí, as a divination tool.

• Includes a detailed “mojuba” or prayer that awakens the orishas and invites them to speak.

• Examines in depth the five basic patterns that appear when obí is cast and explains how to interpret the oracle's answer.

Obí One of the paths to the spirits within Santeria is through a divination technique known as obi, the coconut oracle, which gives the petitioner access to the orisha of the same name. The orisha Obí began as a mortal human who ascended to become an orisha as a reward for good deeds done on Earth, then fell from grace because of excessive pride. When he descended back to Earth, his spirit was embodied in the coconut palm. Though he no longer has a tongue, he can answer questions posed to him through the patterns made by four pieces of coconut shell cast as a divination tool. Obí: Oracle of Cuban Santería is the first book to fully explore the sacred body of lore surrounding Obí, as well as his particular rituals and customs, including opening considerations, casting and interpreting the oracle, and employing advanced methods of divination. Also explained are the previously unpublished secrets of closing the oracle properly so that any negative vibrations will be absorbed by the coconuts and permanently removed from the diviner's home.