If you want a huge collection of the best myths and discover captivating stories of gods, goddesses, monsters and mortals, then keep reading... This book includes five captivating manuscripts: * Greek Mythology: A Captivating Introduction to… 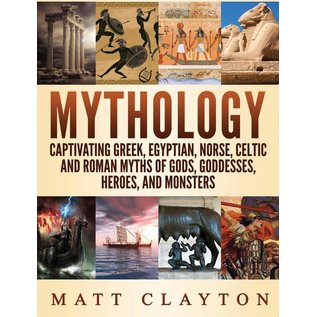 In the first part of this book, you'll find the following Greek myths and topics covered * In The Beginning: The Creation of the World, and the Titan-Olympian War * The Rulers of Olympus * Prometheus and Epimetheus * The Birth of the Muses * The Olympian Gods and Goddesses * The House of Atreus and the Trojan War * Odysseus' Long Way Home * Odysseus' Homecoming * Agamemnon's Homecoming and Orestes' Choice * Oedipus and the Prophecies * Oedipus' Children * Cupid and Psyche * Short Tales * And Many More

In the second part of this book, you'll find the following Norse myths and topics covered * The Creation of the Worlds * The Building of Asgard * Why Odin Has One Eye and Tyr Has One Hand * The Mead of Poetry * Loki the Thief * Love and Trouble * Thor the Bride * Thor's Adventures in Utgard * Odin the Host and Odin the Guest * Andvari's Curse * Regin and Sigurd * Sigurd and the Dragon * The Marriage of Sigurd * Brynhild's Betrayal * The Death of Sigurd * The Passing of Balder * Ragnarök * Grace Note: The Story of Rolf Krake

In the third part of this book, you'll find the following Egyptian myths and topics covered * Creation Myths * The Birth of Osiris * The Tale of Isis and Osiris * The Lament of Isis and Nephthys * The Battle of Horus and Set * The Birth of Queen Hatshepsut * The Tale of the Famine * The Shipwrecked Sailor * The Two Brothers * The Princess and the Demon * The Taking of Joppa * Two Tales of Setne Khamwas

In the fourth part of this book, you'll find the following Celtic myths and topics covered * The Children of Lir * The Birth of Cuchulainn * How Cuchulainn Got His Name * Pwyll, Prince of Dyfed * The Story of Culhwch and Olwen * The Romance of Tristan and Iseult * And more!

In the fifth part of this book, you'll find the following Roman myths and topics covered * The Wanderings of Aeneas * The Story of the Founding of Rome * The Rape of Lucretia * Hercules and the Giant of Latium * The Quest for the Golden Fleece * The Creation of the World * And many more!

So if you want to learn more about these five mythologies, click "Add to Cart"!