Memory Palaces and Masonic Lodges: Esoteric Secrets of the Art of Memory - by Charles B. Jameux

Home / Memory Palaces and Masonic Lodges: Esoteric Secrets of the Art of Memory - by Charles B. Jameux 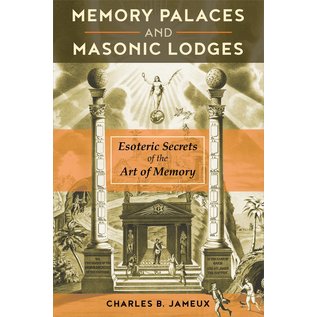 • Explains the classical techniques of the art of memory, how they were reworked by hermetic thinkers during the Renaissance, and how they contributed to the transformation of operative Freemasonry into speculative Freemasonry

• Traces the creation of speculative Freemasonry to 1637, one hundred years earlier than previously thought

In Antiquity, the art of memory was a mnemonic device that allowed an orator, such as Cicero, to recall all the points he wished to make by associating each of them with an image or architectural element in the site he was speaking. When this art was rediscovered in the Renaissance, hermetic thinkers like Giordano Bruno reworked it into a method that allowed them to acquire knowledge with the creation of "memory palaces." The elements of these memory palaces were not intended to trigger the memory but would actually transform into talismanic objects with knowledge entirely new to the seeker. In this book, Charles B. Jameux shows that this hermetic reworking of the classical art of memory was no mystery to operative Masons, who grafted it onto their own rituals, catalyzing the transformation of operative Masonry into speculative Masonry. He shows how the hieroglyphic writing used during the Renaissance in the art of memory provided the groundwork for one of the most esoteric elements of masonic practice: the grasp of the realm of image by the letter, where symbols were "buried" within words. Using archival evidence from 17th-century Scotland and earlier, combined with the research of modern scholars such as Frances Yates and David Stevenson, Jameux argues that the creation of speculative Freemasonry can be traced back 100 years earlier than conventional history records—to 1637, when the first recorded use of the Mason's Word appeared and with it, the first known appearance of the symbolic Temple of Solomon. He follows Giordano Bruno's visit to the British Isles in the late 16th century and the subsequent activities of the men he met there, showing that Masonic symbolism owes much of its current form to early memory palaces, which represented the Masonic lodge and temple in their fully imaginary states. Revealing the pivotal role of the memory palace and hermetic traditions in early Masonic symbolism, Jameux sheds new light on the Masonic questions asked of each initiate and the spiritual importance of the Temple of Jerusalem to Freemasonry.