Letters From the Devil's Forest: An Anthology of Writings on Traditional Witchcraft, Spiritual Ecology and Provenance Traditionalism - by Robin Artisson

Home / Letters From the Devil's Forest: An Anthology of Writings on Traditional Witchcraft, Spiritual Ecology and Provenance Traditionalism - by Robin Artisson

Concerning "Letters from the Devil's Forest: An Anthology of Writings on Traditional Witchcraft, Spiritual Ecology, and Provenance Traditionalism", the latest published work by Robin Artisson, occultist & writer of some renown. IN THIS latest… 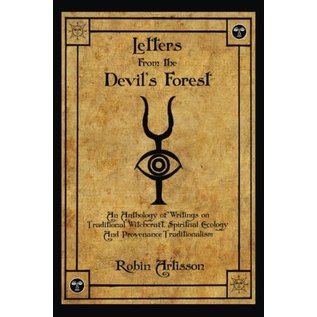 Concerning "Letters from the Devil's Forest: An Anthology of Writings on Traditional Witchcraft, Spiritual Ecology, and Provenance Traditionalism", the latest published work by Robin Artisson, occultist & writer of some renown. IN THIS latest work, witch, metaphysician, and traditionalist Robin Artisson presents an in-depth and darksome interior vision of many dimensions of the old and nearly forgotten Art of true Witchcraft. "Letters from the Devil's Forest" is a lengthy anthology of Artisson's writings regarding every topic of essence and interest to the student or researcher of the half-remembered occult practices of "spirit-pacting" and spirit-allegiance: the timeless root-practices that underlie the genuine sorcerous traditions of the West. Over 130 chapters, representing public and private writings done by Artisson in the last five years, but drawing on over 20 years of his own practice and in-depth researches, are brought together into one informative tome, to better serve the needs of the modern mystic or malcontent in search of a roadmap to the hidden angles of life's most seductive mystery: the mystery of sorcery, and the parallel mystery of spiritual ecology. The generous amounts of material housed in this encyclopedia of lore comes divided into nine major portions, including a detailed treatment of the lost occult anthropology- the very oldest human beliefs on death, the soul, and dying- and what these beliefs can mean for us alive today; many ethical, practical, and instructional essays on various forms of sorcerous art, focusing on material long pre-dating the modern occult emergence; essays on the strange themes and practices of the "Hidden Seasons" or the Witch-sabbats; in-depth daimonological ponderings and writings on the "Master Entity" himself, the Witchfather who stands behind genuine covenants of Witchcraft and the Master-Spirits who share our world and act as tutelary spirits to Witch-kind; scathing criticisms of the lies and falsehoods of modernity and insightful essays offering soul-satisfying alternatives to unquestioned faith in modern myths; sharp philosophical countering and criticism of the mainstream religions that have besmirched the world with their hatreds and absolutisms for centuries, and continue to torment the world today; foundational essays concerning "Provenance Traditionalism" or the secret tradition that emerges from the origins of Western culture and whose metaphysics and insights are still to be discovered encoded in folklore and mythology. Also included is a potent selection of folktales and traditional stories, some original but most from deep in the folk-tradition, analyzed and elucidated to reveal the potent "soul-deep" codes that can transform men and women into wiser, more cunning people as they undergo their fateful journeys through this world.

"Letters from the Devil's Forest" is a true treasury of the Hidden and Despised Art; it contains, in over 700 pages, almost ceaseless "Art-teaching" material, sorcerous maxims, gems of practice, some quite old invocations, poems, channeled writings, warnings, ethical and moral ponderings with regard to the sorcerous arts and to living outside of the mainstream of the modern and greedy spirit, inspirational quotes from past and present masters, wrapped together with Artisson's own sometimes sparkling, sometimes questionable brand of humor and wit, and crowned with original art flourishes and atmospheric ornamentation by Stephanie Houser.