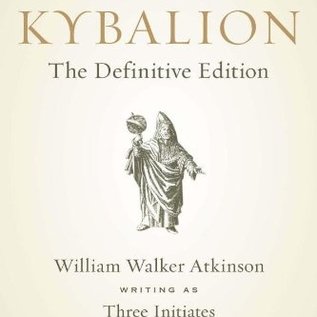 $17.95 Excl. tax
Brand:
OMEN
Here is the flagship edition of the most popular occult work of the past century, now published with a groundbreaking historical introduction that establishes its authentic authorship and a "lost" bonus work by the original author.

It is one of the most mysterious and hotly debated occult works ever written-and without question the most popular and widely influential book of arcane philosophy of the twentieth century: The Kybalion has been credited only to the cryptic "Three Initiates" since its first appearance in 1908. Debate rages over the identity of the Three Initiates, the origin of the book's mysterious title and insights, and the nature of the Hermetic teachings on which it is thought to be based.

Now the veil is parted.

The Kybalion: The Definitive Edition presents the first full- scale analysis of this work of practical occult wisdom. It features the complete text of The Kybalion and the first-ever publication of Atkinson's previously unknown post-Kybalion work: The Seven Cosmic Laws.

In an engaging introduction to this unique volume, religious scholar Philip Deslippe surveys the work's context, history, and impact (including as a source of spiritual insight to communities ranging from New Thought to Black Nationalism), and provides a biographical sketch of its elusive author, the New Thought pioneer William Walker Atkinson.

As valuable to new fans as it is to longtime readers who crave more knowledge about Atkinson and his work, The Kybalion: The Definitive Edition illuminates the remarkable history of this long-cherished text.