Initiatic Eroticism: And Other Occult Writings from La Flèche - by Maria de Naglowska 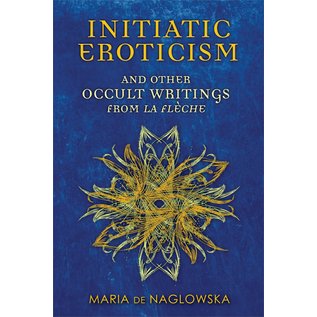 • Contains the complete collection of articles from all 20 issues, from October 1930 to January 1935

From October 1930 to January 1935, Maria de Naglowska—Russian mystic, esoteric high priestess, and self-styled "Satanic Woman" of 1930s Paris—published 20 issues of her newspaper, La Flèche, which she sold on the streets of Montparnasse and by mail-order subscription. Bought by many now famous people, including André Breton and other Surrealists, the newspaper served as an introduction to Naglowska's revolutionary religious system called the Third Term of the Trinity, which considered the Holy Spirit of Christianity to be feminine and taught the importance of sex for the upliftment of humanity. Available for the first time in English, this complete anthology of articles from all 20 issues of La Flèche includes an introduction and notes by translator Donald Traxler, who contextualizes Naglowska's life and teachings within the larger occult systems of the time, such as Julius Evola's Group of Ur. He explains how most of the articles were written by Naglowska herself, often under pseudonyms because of the controversial nature of her ideas. In addition to writings on sacred sexuality and religious philosophy, this collection includes essays on feminism and on other esoteric thinkers, such as René Guénon and Krishnamurti, as well as two never-before-published essays by Julius Evola on the magic of creation, the special power of symbols, and the march of progress and materialism.