Greek Mythology: A Fascinating Guide to Understanding the Ancient Greek Religion with Its Gods, Goddesses, Monsters and Mortals - by Matt Clayton

Home / Greek Mythology: A Fascinating Guide to Understanding the Ancient Greek Religion with Its Gods, Goddesses, Monsters and Mortals - by Matt Clayton

A Fascinating Guide to Understanding the Ancient Greek Religion with Its Gods, Goddesses, Monsters and MortalsThe ancient Greeks were explorers in many ways. They traveled to new places, creating colonies in strange lands far from their… 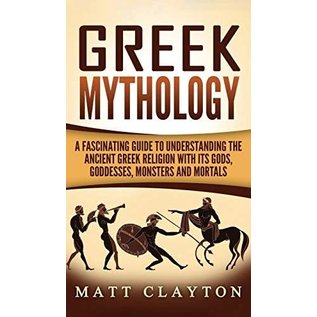 A Fascinating Guide to Understanding the Ancient Greek Religion with Its Gods, Goddesses, Monsters and MortalsThe ancient Greeks were explorers in many ways. They traveled to new places, creating colonies in strange lands far from their original homes. They were survivors. They were honorable thieves. They used their cunning to explore the frontiers of philosophy, and they wrested from the chaos of the surrounding wilderness the building blocks of civilization.Though the Greeks were late to the game of writing, what they wrote became an important part of our world's heritage. Greek heroes taught us many lessons, from Homer's poetry about war and a warrior's return home to the tales of Cadmus, Jason, Herakles and even Oedipus.The myths of Greek heroes give us a glimpse beyond the edge of history, into the lives of very real people. How much of their tales are true, we may never know. But this book will present their tales in a new light, hopefully making their experiences a bit more real and perhaps shining a light on what may have really happened behind the distortions of time and generations of misunderstanding.This book is broken into four parts. The first will explore Greek heroes, what they were like and what they accomplished. The second part of the book will tackle Greek religion—the gods and goddesses which establish the backdrop against which Greek legends were formed.In the third part of the book, we take a close look at the myths of Greek monsters. And finally, in the fourth part, we explore the possible meaning behind the literal words of Greek mythology. Early in the written history of ancient Greece, we have the great Athenian lawgiver, Solon. He attempted to tame the unruly beast within the heart of each Greek hero. They were selfish, each and every one of them. But they also had a code of honor that helped them rein in their selfishness. So, we will end the book with Solon, who established laws so unpopular with the wicked that the lawgiver left Athens on an extended vacation so that others would not be able to talk him out of the laws he had handed down. But we will start with the heroes who came before Greek history began.Just some of the topics covered in this book include Greek Heroes Honorable Thieves Legends of Pride Legend of Cadmus, Founder of Thebes, Greece The Illiad The Odyssey Myths of Wonder Cecrops and Dragons Greek Religion The Burdens of Selfishness and Hubris The Ages of Man Morals of the Gods Zeus Giving Birth to a New Kind of Chaos Greek Monsters Typhon and Echidna Perseus and Cetus Herakles and His Labors Greek Connection to Civilization Foundations of Greek Thought And More Get your copy of the book now and learn more about Greek mythology