The Grail: The Celtic Origins of the Sacred Icon (Us) - by Jean Markale

Home / The Grail: The Celtic Origins of the Sacred Icon (Us) - by Jean Markale 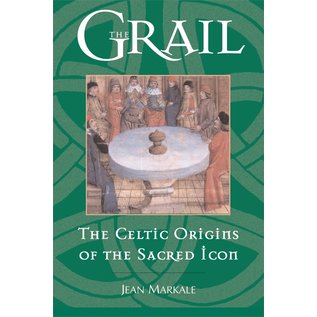 • By the world's preeminent authority on Celtic civilization

The Grail has long excited the imaginations of those seeking to see beyond the world of appearances. No other sacred object has inspired such longing or such dread. The Grail is the archetype of the marvelous object in which each individual can enclose the goal of his own personal quest. For some the goal of this quest has been divine grace or the Philosophers' Stone, for others it is simply a treasure that connects various episodes of the King Arthur legend.Yet the Grail, as an object that is both close and unapproachable, was not the original focus of these stories. The Celtic tales on which the Grail legend is based emphasize the theme of the Quest. Through his exploration of several versions of this myth that appeared in the Middle Ages, Jean Markale digs deep beneath the Christian veneer of these tales, allowing us to penetrate to the true meaning of the Grail and its Quest, legacies of a rich Celtic spirituality that has nourished the Western psyche for centuries. He also examines how these myths were later used by the Knights Templar, as well as how their links with Alchemy and Catharism played a decisive role in the shaping of Western Hermetic thought.