Spirit boards, also known as talking boards, are a divination tool that allows the living to communicate with the dead using numbers, letters, and a few simple words such as Yes, No, Hello, and Goodbye. The practice is commonly said to have originated in the 1800s, but some believe it was much earlier than that. Perhaps the most controversial divination tool, spirit boards manufactured by board game companies have been the subject of many Hollywood movies, and have gotten a bad reputation from their exploitation in horror films. In truth, they are powered by the people who use them, and they are not a "gateway" or "portal" on their own. Witches and other competent psychics are able to receive messages from spirit by placing their hands upon the planchette, and recording the letters, numbers, and words that it points to, forming words, sentences, dates, and other psychic information. Our selection of spirit boards are made by Witches to be used not as games, but as potent tools of mediumship. 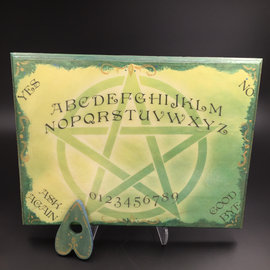 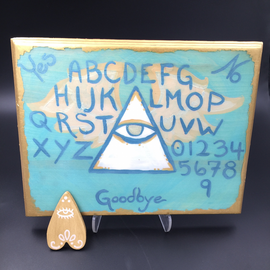