Becoming a Garment of Isis: A Nine-Stage Initiatory Path of Egyptian Spirituality - by Naomi Ozaniec

Home / Becoming a Garment of Isis: A Nine-Stage Initiatory Path of Egyptian Spirituality - by Naomi Ozaniec 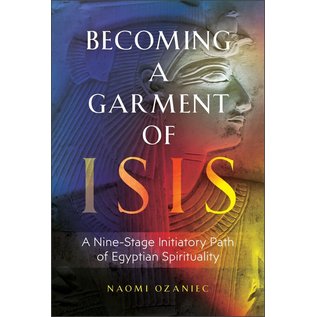 • Details the nine stages of the ancient Egyptian initiatory path, describing each stage’s powers as well as the culminating ceremony called “The Crown of Isis”

• Shares the author’s personal journey as a Garment of Isis and her own powerful interactions with Isis, which culminated in her serving as Oracle of Isis at the Parliament of World Religions in Chicago in 1993

The Sacred Science of ancient Egypt was an initiatory spiritual system, a technology of consciousness designed to birth a mystical communion with the divinities, an embodied union of being between the eternal and the mortal. After initiation was completed, the re-identified being, now divinely possessed, was known as a “Garment of Isis,” signifying that the goddess Isis dwelt within them. As Naomi Ozaniec reveals, it is still possible to enter into these ancient Mysteries, to encounter the living mysticism of Khemetic Sacred Science and become a vessel for the divine. Offering a practical guide to the key principles within the Egyptian temple tradition, she explores the process of creating and developing a personal relationship with the neteru, the divinities and living forces of creation of ancient Egypt. She details the nine stages of this initiatory path, which are divided into three phases--Heartmind, Spiritmind, and Soulmind. This step-by-step, interactive process culminates in a ceremony called “The Crown of Isis.” For each of the nine stages, the author provides profound guided meditations and illustrates the manifestation of the initiate’s powers through stories of awakening brought on by this spiritual path. She also shares her personal journey as a Garment of Isis and her own powerful interactions with Isis, which culminated in the author holding the office of Oracle of Isis at the Parliament of World Religions in Chicago in 1993. Offering an accessible yet substantive guide to initiation into the Egyptian mysteries, this book details how to gradually awaken and attune your mind to the symbolic, open access to higher realms of consciousness, and enter into a mystical marriage between personal and divine consciousness.