Athena - 4 inches Tall in Bronze - Made in Greece

Home / Athena - 4 inches Tall in Bronze - Made in Greece 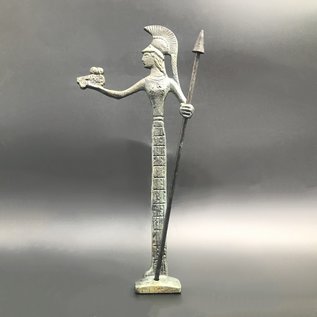 In Greek religion and mythology, Athena also referred as Pallas Athena is the goddess of wisdom, courage, civilization, law and justice, just warfare, mathematics, strength, strategy, the arts, crafts, and skill. She was also the protectress of women and female crafts. She was born, fully-armed, from the head of her father Zeus and is usually depicted in full armour. This figure, as with all our other bronze items, are cast in Greece, using the traditional 'lost wax' method, therefore each piece is unique. It was made in Greece, stands 64 centimeters high, 30 centimeters width, and weighs approximately 4 kg.