In Greek mythology Medusa was a monster, a Gorgon, generally described as having the face of a hideous human female with living venomous snakes in place of hair. Gazing directly upon her would turn onlookers to stone. 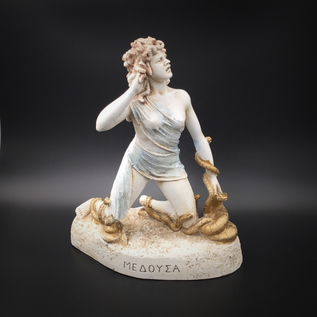 In Greek mythology Medusa (“guardian, protectress”)was a monster, a Gorgon, generally described as having the face of a hideous human female with living venomous snakes in place of hair. Gazing directly upon her would turn onlookers to stone. Most sources describe her as the daughter of Phorcys and Ceto, though the author Hyginus (Fabulae, 151) interposes a generation and gives Medusa another chthonic pair as parents.

Medusa was beheaded by the hero Perseus, who thereafter used her head as a weapon until he gave it to the goddess Athena to place on her shield. In classical antiquity the image of the head of Medusa appeared in the evil-averting device known as the Gorgoneion.

The three Gorgon sisters—Medusa, Stheno, and Euryale—were all children of the ancient marine deities Phorcys (or “Phorkys”) and his sister Ceto (or “Keto”), chthonic monsters from an archaic world. Their genealogy is shared with other sisters, the Graeae, as in Aeschylus’s Prometheus Bound, which places both trinities of sisters far off “on Kisthene’s dreadful plain”:

Near them their sisters three, the Gorgons, winged
With snakes for hair— hated of mortal man—

While ancient Greek vase-painters and relief carvers imagined Medusa and her sisters as beings born of monstrous form, sculptors and vase-painters of the fifth century began to envisage her as being beautiful as well as terrifying. In an ode written in 490 BC Pindar already speaks of “fair-cheeked Medusa.”

In a late version of the Medusa myth, related by the Roman poet Ovid (Metamorphoses 4.770), Medusa was originally a ravishingly beautiful maiden, “the jealous aspiration of many suitors,” but when she was caught being raped by the “Lord of the Sea” Poseidon in Athena’s temple, the enraged Athena transformed Medusa’s beautiful hair to serpents and made her face so terrible to behold that the mere sight of it would turn onlookers to stone. In Ovid’s telling, Perseus describes Medusa’s punishment by Minerva (Athena) as just and well earned.(B527)