African Myths and Egyptian Gods: A Captivating Guide to African Mythology and Gods of Ancient Egypt - by Matt Clayton

Home / African Myths and Egyptian Gods: A Captivating Guide to African Mythology and Gods of Ancient Egypt - by Matt Clayton 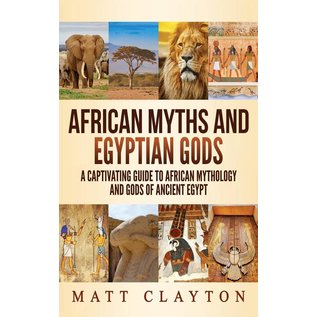 Explore Captivating African Mythology and Egyptian GodsTwo captivating manuscripts in one book: African Mythology: Captivating Myths of Gods, Goddesses, and Legendary Creatures of AfricaEgyptian Gods: A Captivating Guide to Atum, Horus, Seth, Isis, Anubis, Ra, Thoth, Sekhmet, Geb, Hathor and Other Gods and Goddesses of Ancient EgyptThe continent of Africa is home to fifty-four countries that together harbor over three thousand cultures, each with their own ways of life and each with their own stories. Some of these stories have their origins in the folk beliefs of people native to their particular region, while others were imported from or influenced by cultures from elsewhere who settled in Africa.A great number of African folktales have been transmitted orally from person to person down through the ages, but since the nineteenth century, many stories have been written down and transmitted to audiences beyond the boundaries of the cultures that created them. One important-and tragic-conduit for the transmission of these stories beyond African shores was the European slave trade. Captured Africans who were brought to the Americas and the Caribbean fought to keep alive what they could of their home cultures, and this included their folktale traditions.African folktales come in many different types. Some are myths explaining the origins of things, while others are tales of heroes with supernatural abilities. Animal stories are many and varied, and they usually involve some kind of trickster who uses his wiles to get out of sticky situations and sometimes into them. There are also cautionary tales explaining why it is important to behave well and treat others with respect, while other stories have a style and shape similar to that of a fairy tale.Some of the topics covered in manuscript 1 of this book include: Animal TricksterssHero TalesCautionary TalesThe Influence of IslaAnd much, much more Some of the topics covered in manuscript 2 of this book include: Amen (Amun, Amon, Ammon)Anubis (Anpu, Inpw)Aten (Aton)Atum (Tum, Tem, Atem, Temu)Bastet (Bast, Boubastis, Pasht)The Book of the Dead and Other Funerary TextsThe Four Sons of HorusGeb (Seb, Keb, Kebb, Gebb)Hapy (Hapi)HathorHorus (Hor, Her, Heru, Har)Imhotep (Imouthes)IsisKhnum (Chnum)Khonsu (Khons, Chons)Maat (Ma'at, Ma'et, Mayet)Nefertem (Nefertum)Neith (Neit)Nephthys (Nebt-het)Nun (Noun, Nu)The Ogdoad of HermopolisOsirisPtahRa (Re, Pre)Serapis (Sarapis, Userhapi)Set (Seth, Sutekh)Sobek (Suchos)ThothAnd more So if you want to learn about African Mythology and Egyptian Gods, scroll up and click the "add to cart" button